The LDP had dominated Japanese politics since the mid-1950s.
The DPJ became ruling part in September 2009 by strong public support.

As a matter of fact, when DPJ became a ruling party ,
Most of Japanese believed DPJ could be a savior of Japanese politics.

First prime minster , Yukio Hatoyama could not work for a year as a prime minister of Japan.
He took the responsibility for series of money scandals.
So many Japanese people felt deeply betrayed by him.
Especially, people who live in Okinawa disappointed because he promised to move
US base to another place.  He also gave up.

When Hatoyama quited the prime minister ,
Hatoyama instructed to step down for Ozawa

because he has many money scandals.

Why I can't allow Ozawa is that Ozawa purchased land in northern Okinawa near Camp Schwab,
the proposed site for the new U.S. military airfield.
The purpose is that he has much gain by selling this land.

Now , Naoto Kan is responsible for prime minister of Japan.

I personally expected Naoto Kan because he doesn't have any scandal.
However Naoto Kan can not control Ozawa.

And Prime Minister Naoto Kan's DPJ presidency expires in September,
The DPJ is planning to hold its party presidential election Sept. 5,
and the election will decide whether he will remain at the party helm
and thus stay prime minister.

According to today's news, Ozawa is possible to declare his candidacy.
This election is voted by only DPJ members, Public can not vote.

Where will our Japan go ? 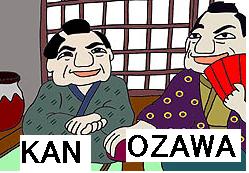 Prime minister KAN always apologize to Ozawa over and over again.